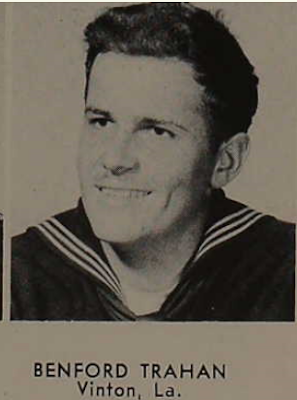 I haven't done a Treasure Chest Thursday post in awhile, but I'm going to interrupt my normal pattern to bring an awesome find. I have been posting all of my treasure chest items on my maternal grandfather, but tonight I found something really cool on my paternal grandfather.

I saw on Ancestry.com that they had added a new database called "U.S. Navy Cruise Books Index, 1918-2009." I knew my paternal grandfather had served in the Navy in the mid-1950s, so I thought I would check it out. I found him in the 1955 yearbook for the USS Plymouth Rock. Pretty sweet! The yearbook was really neat because it had a description of each division on the ship and what they did. Then it had each of their pictures with names and origins. And then it had a history of where it had sailed from 29 Nov 1954 to 29 Nov 1955. It looks like my grandfather was a quartermaster in the Navigation Division. According to Wikipedia, the quartermaster was responsible for steering the ship and applying the helm orders given by the Captain or watchkeeping officers.

Posted by Jennifer Sepulvado at 8:50 PM 3 comments Links to this post

First, I want to wish everyone that is in Charleston at the NGS conference fun times! I wish I could be there. I originally planned to go, since I only live four hours away, but it just doesn't seem to be in the cards for me this year.

On a happier note, the main reason I'm not going is because I am getting MARRIED this summer on July 23. Yes, it is for real this time. After much counseling, a renewed relationship, a move across the country, an engagement ring lost in the Atlantic Ocean, the acquisition of two furry children, and 6 1/2 years, it is about time! Funny how things work out. I was so devastated in the summer of 2009 when my fiance called off the wedding. Now, I couldn't imagine any other wedding or any other marriage. I'm so glad we didn't get married then. We are both in much better places emotionally and spiritually, and we communicate so much better now. I even remember at one point him saying that maybe we could get married in the summer of 2011. I laughed at him and said, "What? Are you crazy? It has already been 5 years. We've already seen at least 3 of our friends get engaged after us and get married before us. I'm not waiting that long for you. If we're not married by then, we're not getting married." Again, funny how things work out. Sometimes I guess that God has other plans for us. He even threw in a cross-country move for giggles.

So, I'm sad to miss the conference, but I'm happy to be marrying my best friend. Even better, he is coming in this weekend, and I would choose him over a genealogy conference any day (you won't catch me saying that about many things). He stayed behind in Louisiana and didn't make the move with me, so this long distance thing has been kind of rough. Another reason I can't wait until the wedding. I will be so happy to be in the same city again. As much fun as it has been exploring a new place, happiness is really about who you are with and not where you are. A wise friend I worked with at Walgreens told me that once, and it's one of the most true statements I've ever heard. I think that's why our ancestors mostly seem to travel to new places in packs with friends and family.

Anyhow, I look forward to the blog posts from the conference. Maybe I will make it to the FGS conference in Illinois! 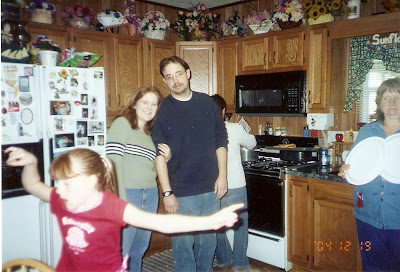 This is when we had been dating only 3 months. Gosh, we were young.
For you genea-peeps, that is my mom to the right, my sister at the stove, and my little cousin with her arms flailing. That is my grandmother's kitchen during our annual Christmas dinner. We had our Christmas early that year because my aunt and cousin were visiting from Michigan.

Posted by Jennifer Sepulvado at 8:06 PM 4 comments Links to this post 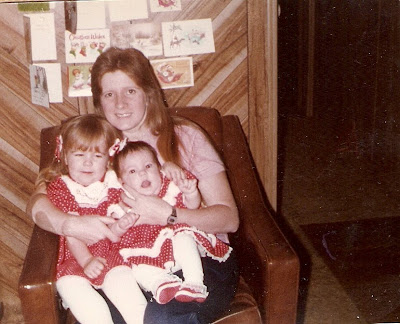 Mom, myself, and Kathleen
Christmas 1984

Posted by Jennifer Sepulvado at 2:37 PM 0 comments Links to this post

Let's hope that I can stay as focused on my May genealogy goals as I did on my April ones.

1) Add at least 5-10 more items from my "To Be Entered" folder into my RootsMagic database.

2) Clean up source citations for Ancestry.com databases in my RootsMagic database. I had been cleaning up sources by family, which I will continue to do, but there are some sources that can be cleaned up quickly if I fix all the citations for those sources at one time. These are the ones that usually require very little detail and very little media images. Mainly, they are the databases at Ancestry.com, such as the Michigan deaths database or the Texas birth index.

3) Start adding HOFFNER/URBAN family sources to my RootsMagic database. This is my Aunt S's family line. I was going to do this last month, but I added a little more detail to my Aunt L's family line instead. Most of my sources for this will be obits I obtained a few years ago from a Louisiana newspaper and online sources, such as census records and such. They originated in New Jersey, Delaware, and Pennsylvania, which are three states I'm not too familiar with, so this ought to be interesting. I'll have to see what online databases are available for these states.

And those are all my goals this month. I'm going to be studying again for the CPA exam, so I'm not going to get too ambitious.

Posted by Jennifer Sepulvado at 9:24 PM 1 comments Links to this post