The Evolution of My Filing System

I think I have changed my filing system too many times. When I first started genealogy, I had no filing system. I had a blue shoulder bag that I carried around to the library and shoved copies in it, usually in the pocket of the one binder I had. The thought really scares me now. This lasted from the time I was about 13 to the time I was about 23. Of course, I was very young, so I did not have any original copies of anything. My grandparents and parents still had those things. Most of the "documents" consisted of print-outs of WorldConnect databases and FamilyTreeMaker personal pages. Eventually, the bag overflowed, and I had to start putting documents in another bag. These miraculously survived all my moves from dorm to dorm during college college. Once, I even lent my then 13-year-old cousin who I was training to be a genealogist (I was about 20) some copies of death records and such that I didn't bother to copy before giving them to her. My grandmother still had the originals, but that was still risky. Several months later, I asked her for them, and she didn't know where they were. Luckily, we found them in the attic. I'll never do that again. That was in the days before scanners came on every printer (or before I could afford printers with scanners).

When I was about 23 or 24, and on my way to becoming a real adult, I finally decided to start organizing. My first I system used binders with tabs for each surname. I also had a binder strictly for pedigree charts in number order (these were done in the day when you numbered each pedigree chart with some formula that I can't remember now and charts were handwritten...I still have that binder b/c I can't seem to part with my original work). I organized the papers in the surname sections of the binders in chronological order. This was okay, except that it was hard to lug those binders around because they were pretty hefty. I used 2 or 3 inch binders with several surnames in each one. But this system was still much better than a blue shoulder bag and an overflow bag.

So about 2 years later, I decided to switch to a folder system with a filing cabinet instead. I figured these would be easier to take around to libraries. So I basically transferred everything from the binders to the folders. I kept my folders by surname, with a few folders for more general info, such as a "Michigan" folder for documents pertaining to Michigan or even a particular county in Michigan and not to a particular family. This system was okay, but I still did not completely like it for some reason. It was partially due to the fact that my Pemberton folder was way too large. File folders make it harder to present info to family members. The papers frequently got out of chronological order.

Then I started reading about the filing system suggested by Liz Kerstens Kelly, maker of Clooz software, an electronic filing cabinet. She suggested filing documents by type of document with no regards to surname. Each document would have a unique idenifier, such as CEN 001 for a census record or BIR 001 for a birth record. I liked this idea b/c with the previous system I was using made up of surname folders, I was confused as to whether or not I should put a marriage record in the husband or wife's surname folder or both. Liz, as well as some other intro genealogy books I was reading at the time, also mentioned havng a set of documents that never ever leave home. These other genealogy books also suggested filing by couple rather than by surname. I liked this idea b/c that would make my Pemberton folder less cumbersome. I could break it up into couples rather than having one large folder for all Pemberton's. This also solved the problem of where to put a marriage record...in the couple's folder!

This is when I decided on two filing systems. The first filing system consists of documents that never leave home. These are filed by type of document without regard to surname. I use 2-inch binders for these. It does not matter that they are heavy b/c I never, ever bring these to libraries. But I also decided that I liked the filing by couple b/c the binders never leave home, so it is impossible to take them on a research trip to Michigan. I began using file folders for my couples, but I soon switched to smaller one-inch binders b/c binders just make it much easier to present to others. One-inch binders are not too terribly difficult to bring on research trips, provided you do not need more than a couple. If I do need more than a couple, I always have those file folders on hand so that I can put everything into those just for traveling purposes (not permanently). My binders are labeled by surname on the outside, with tabs for individual couples on the inside. In the front of the binder, I put an ancestor table like the one below. This comes from my DeLuca binder. 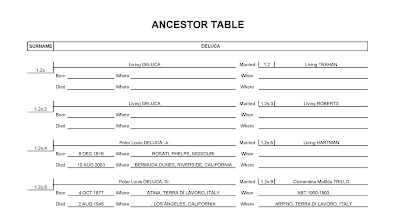 I got the idea from Bill Dollarhide's book, Managing a Genealogical Project. I created my own version in Excel. It's similar to a pedigree chart, but I think it's easier to read. I start with the most recent person in that line and go back to the last person. The one above is for my brother-in-law's family. I traced his paternal line back to his great-grandparents, who immigrated from Italy. After the ancestor table, I put the DeLuca-Trahan tab followed by the DeLuca-Roberts, DeLuca-Hartman, and DeLuca-Trillo tabs. Here is what lies behind the tabs:
After the DeLuca-Trillo tab, I have a tab called "Collateral." I have not done a whole lot of collateral research on the DeLuca's since they are not one of my own primary lines, but I have a few marriage index entries and marriage licenses I've found on Ancestry.com for my brother-in-law's aunt and two of his great-aunts.

This is the first binder I've actually completed under my new system, so I'm very excited about that. I feel a huge sense of accomplishment. I will be blogging about my findings on the DeLuca family in the coming weeks. Now that I've got a good handle on my filing system, my next goal is to blog primarily about what I'm researching or what I have been researching recently. Lately, I've been blogging about one thing and researching another. I'm about to get the two in line b/c it gets confusing at times. Of course, I still need to transfer all the rest of my family to the new system (most of them are still under the old surname only system in file folders). Not to mention that I need to continue working on getting all of my family into my Legacy database and properly sourced. Many of them are still sitting unsourced in my FTM database. Geez! I just have to remember that I cannot do it in one day, and I should be proud that I don't have the blue shoulder bag system anymore and that I now understand the importance of sourcing!

Email ThisBlogThis!Share to TwitterShare to FacebookShare to Pinterest
Labels: Organization