I have not forgotten about my favorite Italian family. I've just been incredibly busy with graduations and family gatherings, and I got such a great picture of my great-great-grandfather Pemberton that it warranted interrupting the De Luca series...LOL! I've been waiting on a death record to come in for Peter Louis De Luca, Sr., but I still have the genealogy mailbox blues, so I've decided to go ahead without it.

The previous post in this series showed the Peter and Clara De Luca family in the 1930 US Census in Phelps County, Missouri. They were living there with their three youngest children, Anna, Peter Jr., and Lena. We also saw their older daughters, Mary and Rose, living in St. Louis with Mary's husband and young daughter.

This post is primarily about the De Luca family death records I've collected. As one can see, the De Luca family eventually settled in southern California, which is where much of the family remains today. The first one is for Clementina "Clara" Trillo De Luca. I first found her date of death from the California death index at Ancestry.com.


This gave me the date and county of death, which I used to order the death certificate. The unusual thing about this entry is that it gives a mother's maiden name but no father's surname. 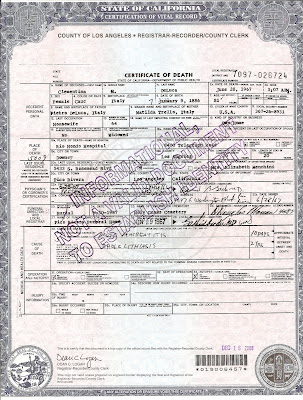 When I got the death certificate, I realized why Clementina's father's surname was not listed in the index at Ancestry.com. On the actual death certificate, her father is listed as Pietro DeLuca. However, I knew that was her husband and not her father, and I presume that the indexer at Ancestry.com realized this as well. So then I wondered if Matilda Trello was truly her mother's maiden name, or if that was her own name. I had learned from Steve Zulpo that Clementina's full maiden name was actually Clementina Matilda Trillo. I have seen this happen before: the informant gives her own parent's names instead of the parents of the deceased. I believe this is what Elizabeth (De Luca) Menchini did on her mother's death certificate.

So, I ordered the death certificate of her son, Peter Louis De Luca, Jr., my brother-in-law's grandfather. I figured this would help in confirming her own maiden name as Trillo/Trello. 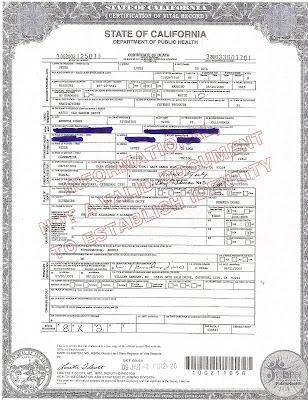 This stated that Clementina's maiden name was in fact Trillo, and that this was not her mother's maiden name.

I also found the following on Peter in the California death index at Ancestry.com:


I'm pretty sure that birth date of 1855 is incorrect. From census records and family sources, it appears that he was born in 1877 or 1878. This gives a maiden name for Peter's mother: YENATA. I've taken a look around Louise Shapcott's Surnames of Atina page and determined that this must be a misspelling of IANNOTA. From Peter's death date and the 1930 US Census record, it looks like the Peter and Clara settled in southern California sometime between 1930 and 1945. From this index entry, it appears that he did not have a social security number, or that it wasn't given on his death record.

When Peter's death record arrives, I will do another post here. I have also sent off for Clementina's social security application. Stay tuned!

Links to other posts in this series: